Our History in Cheesemaking

We are proud of Orfer’s history of providing innovative robotic solutions to the cheese industry, but our connection to cheesemaking runs much deeper.

If you are someone in the cheese business, you might appreciate reading this story that spans generations about our co-founder, Karl E. Stucki, and his family. 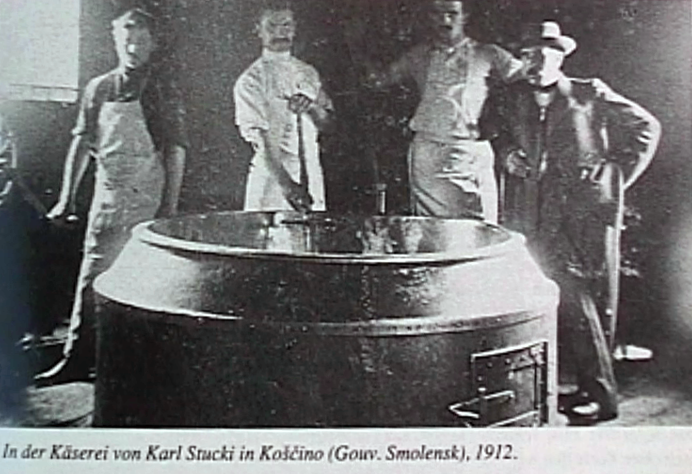 Orfer is known for leading-edge robotic solutions that adapt to meet the emerging needs of the food industry, including many cheese manufacturers. It turns out that Co-founder Karl E. Stucki, has a surprising connection to this business that spans generations. His great-grandfather was a pioneer of cheese production in Russia.

Christian Stucki was the son of dairy farmers near Bern, Switzerland. His dream was to move to North America, but as he was preparing for his voyage, he had a chance meeting with a Swiss businessman returning from Russia. He explained to Christian that industrialization in 1850s Russia created opportunity for those with needed skills.

Christian’s knowledge of cattle breeding, milk processing and cheese production was in high demand. Swiss cheesemaking was more advanced than in Russia at that time, so he caught the attention of a Russian cheesemaker named Kaarlen that engaged him to expand their business. Swiss Emmental was a popular variety of cheese that was an excellent source of protein for Russian factory workers and its shelf life lasted through the winter when milk was scarce.

Christian and his sons soon learned that the large market for cheese in Russia meant that cost efficiency and speed of production were critical. He introduced them to Dutch Edam cheese since it had a shorter production time. Russians fell for its smooth texture and mild flavour. The popularity of the Stucki family cheeses grew. By 1917, the family had 20 dairies producing cheese across the Empire, as well as a thriving export business. But when the Russian Revolution came, their business had to be surrendered to the government.

Over the past 50 years, Orfer has leveraged the knowledge it gained from cheesemaking to offer efficient packaging automation and other logistical solutions to the dairy industry and several other industries. This would have been beyond Christian’s imagination over a century and a half ago, but in many ways, it is a poetic continuation of his entrepreneurial legacy.

Learn more about how Orfer can provide the right solution for your production line!
Click to Request a Quote

Stay in the know

Book a call to learn more